‘Warwick Stories – Cases from the Past’ are brief accounts of court cases heard at the Warwick Assizes about 200 years ago and found in the archives by researchers from Unlocking Warwick.

In the early 19th century, England was plagued with forged banknotes and coins coming into circulation. Forgery was regarded as an extremely serious offence, bordering on treason as well as theft. The Chief Constable of Birmingham, William Payn, was determined to find the source of the forgeries in his area of jurisdiction and lighted on an unusual plan. 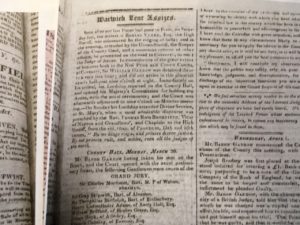 According to the Warwickshire Advertiser, on April 2nd, 1817, a man called Edward Millington appeared before Warwick Assizes charged with ‘uttering’ (using for a purchase), a counterfeit shilling knowing that it was counterfeit. A shilling is just 5p today but was much more valuable then.

The first witness called was Chief Constable Payn. He explained that he had arranged to open a shop with the express purpose of catching people using forged money. It was to be a bakery. He furnished it with 50 quarters of bread and installed the wife of an assistant constable, a Mrs. Taylor, to play the part of the shopkeeper. The loaves of bread had been ‘discretely marked’. The account of the trial continues as follows:

“Witness and an assistant constable were concealed in a room at the back of the shop, and observed the prisoner twice purchase bread in one evening. The second time he was in disguise with a handkerchief tied around his head and he had changed his clothes”. There was a great demand for bread, probably because it was being offered cheaply, and the shop had to close after 3 hours because it had run out of loaves. The court heard that on inspecting Mrs. Taylor’s takings, the constable found that “45 shillings of the 50 she had received were counterfeit”.

Early the next morning, constables went to the prisoner’s house and found three of the marked loaves. Mrs. Taylor remembered clearly he had bought them from her bogus shop. In summing up, the judge said, “the expedient that the Chief Constable had hit upon was as ingenious as it was effective”. The evidence was “conclusive”. The jury took just a few minutes before returning a verdict of “Guilty”.

The judge promptly sentenced Millington to six months in prison, “and to find sureties for his good behaviour for six months more”. Other customers of the Chief Constable’s cut-price pop-up bread shop then appeared before the court in succession. Jane Walker, William Connor, Priscilla Matthews, Maria Matthews, Sarah Richards, Elizabeth Turner, Rebecca Patrick and Ann Preston, (who appeared in court ‘with an infant in her arms’), were all hauled off to jail for 6 months for passing forged coins.

But it could have been worse for them. Six months in jail for passing a forged shilling was lenient compared with the fate awaiting those who passed forged £1 notes. The previous day at Warwick Assizes, two men and four women had appeared before Judge Baron Garrow, (who in recent years featured in the TV series, Garrow’s Law), and had pleaded guilty to the charge of uttering forged notes. They were sentenced to “fourteen years’ transportation”, (presumably to Australia).

The next prisoners to appear before Judge Garrow were also charged with passing forged £1 notes, but it seems they were persistent criminals suspected of distributing large numbers of forgeries. William Gray (23), Ann Bamford (54), William Stewart (30) and Ann Dickens (27) were all found guilty and were sentenced to death. The account continues, “To you, said the learned Judge, the guilty dealers in this horrid system, no mercy can be extended. I would solemnly advise you to employ the little time you have to live in imploring forgiveness from your all-merciful Creator. You must soon appear before the awful tribunal of God to answer for your transgressions. He then passed the awful sentence of the law”.