During the recent periods of lockdown, the Ellacombe chimes in Warwickshire have provided an alternative to full circle ringing. The apparatus in St Mary’s Warwick was rarely used until 2020, since when it has sounded most weeks to remind communities of the continuing presence of the church and its bells.
St Mary’s has ten bells, the heaviest of which weighs 24 cwt, in the key of D. There were five bells in the 16th century, and in the mid-17th Century they were augmented to eight. All the bells were destroyed in the great fire of Warwick in 1694. At the start of the 18th century eight new bells were cast by Rudhall, a Gloucester bell founder, and very soon they were augmented to a ring of ten. Thomas Mears, a bell founder working in the Whitechapel foundry, then recast the tenor bell in 1814.
The ring was completely overhauled in 1901 by John Taylors of Loughborough and six of the bells were recast. The current ring of bells contains six Taylor bells, three Rudhall bells from 1701 and the tenor recast from 1814.
Prior to Sunday Service ringing, the Ellacombe can be heard ringing well known hymns. Carols are played at Christmas, but also change ringing methods can often be heard. The tenor of the Ellacombe is sometimes used for mid-week funerals.
On Saturday 26th June, the Ellacombe will ring out over Warwick. There will be a combination of tunes and changes to entertain the people of the town.
Annie Hall 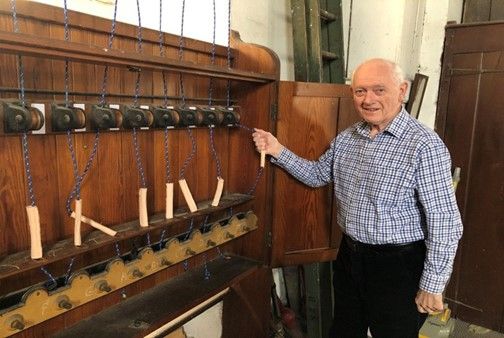