You may have heard of the Pevsner Guides to the English Counties. Did you know that he was particularly fond of Warwick, and its elegant Court House?

Nikolaus Pevsner was born in Germany in 1902. He studied art history and became a lecturer until he was removed from his job because of his Jewish origins. He moved to England in 1933 and became a Fellow at Birmingham University specialising in the history of architecture.

Pevsner is the author of ‘The Building of England’, the famous 46-volume comprehensive guide to the English Counties, with emphasis on the architecture of the buildings.

‘Warwickshire’ was published in 1966. It included a detailed description of the historic buildings of Warwick. The introduction to the town says: 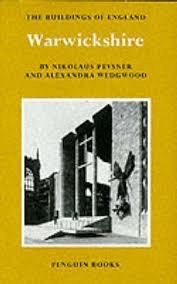 “The ‘burgh’ of Warwick was founded by Ethelfleda in 914. This her connexion with Warwick:  (He quotes John Leland, the 16th century poet, traveller and writer).

The towne of Warwick standithe on a rokky hill, rising from est to west. The beauty and the glory of the towne is in two streets whereof one is called Highe Strete and goeth from est to west …. the other crossithe the midle of it.

Thus Leland, and thus still one’s principal impression of this perfect county town. Its visual homogeneity is largely due to the great fire of 1694 and the rebuilding after it”.

Pevsner goes on to say that the industrial part of Warwick was separate from the old town, and also that the castle does not impinge on the town area. He writes at length about St. Mary’s Church and the Castle, then in a section on the Public Buildings, says:

The upper floor has Doric pilasters and as triglyph frieze. In the centre, in a niche, ‘Justice’ by Thomas Stayner (1731) and a decoratively enriched coat of arms above and below. The principal upper room has fluted Ionic pilasters and a coved ceiling.

In the Mayor’s Parlour, Thomas Oaken’s Coffer, with a tunnel-vault-shaped lid. It is dated 1573. A splendid piece.”

So… Leland writing in the mid-16th century described the ‘beauty and the glory’ of Warwick being typified by the central crossroads, the intersection of the High Street and Castle Street – where the Court House/Town Hall now stands. Pevsner, writing 400 years later, described Warwick affectionately as ‘this perfect county town’, and The Court House as ‘Warwick at its best’.