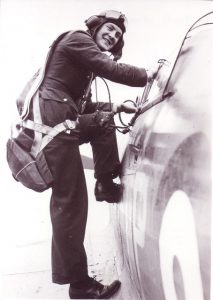 Unlocking Warwick’s War Memorial Project has received prominent coverage in the Warwick Courier once again. This time it is the story of tracking down the relatives of the noted WW2 Fighter Ace, Newell ‘Fanny’ Orton, the first pilot to be awarded the DFC and Bar. His family lived in bridge End.

A French historian, Francois Clauvelin, who is writing a book about the 73rd Hurricane Squadron which operated in Eastern France in 1939 -1940, was keen to get in touch with Orton’s grandsons and asked our researchers to help. He also provided some pictures and documents of the squadron’s exploits battling with Messerschmitts before the German blitzkrieg forced the withdrawal from France of the British forces.

We soon established contact with Newell Orton’s family and they are exchanging information and photographs with Monsieur Clauvelin. We were also contacted by Orton’s nephew, Nigel Robinson who lives in Leamington. He provided some fascinating documents which show that ‘Fanny’ as he was known was a nationally known figure and much admired in Warwick; he was credited with shooting down 17 enemy aircraft with eight ‘probables’ before he himself was killed in 1941.

The Unlocking Warwick research team led by Christine Shaw continues to find the background stories behind the 112 WW2 names on the memorial in Church Street, and these can be found on our special War Memorial website: www.warwickwarmemorial.org.uk